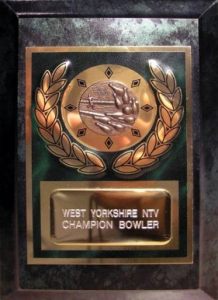 This social event has become almost as frequent as the tasks! Just for fun, we keep a record of scores over each 'season', of which there are three per year, coinciding with the publication of the WYNTV events programme.

We even have a prestigious West Yorkshire NTV Champion Bowler trophy. This is what all those dedicated bowlers are striving towards. And our handicap system means that everyone has a chance to win it! If you think it would look good on your mantelpiece, why not come along and join in the fun? Contact Us

Your handicap for the current season is calculated by subtracting your average at the end of the last season in which you played, from 200. This handicap is then added to your current average to give you a number of points. Hence players are ranked according to who has improved most. This makes it very difficult to win the trophy twice in consecutive seasons! Note that handicaps for new players are calculated from their first two games, and apply for the remainder of the season. You have to play at least four games in a season to win the trophy.